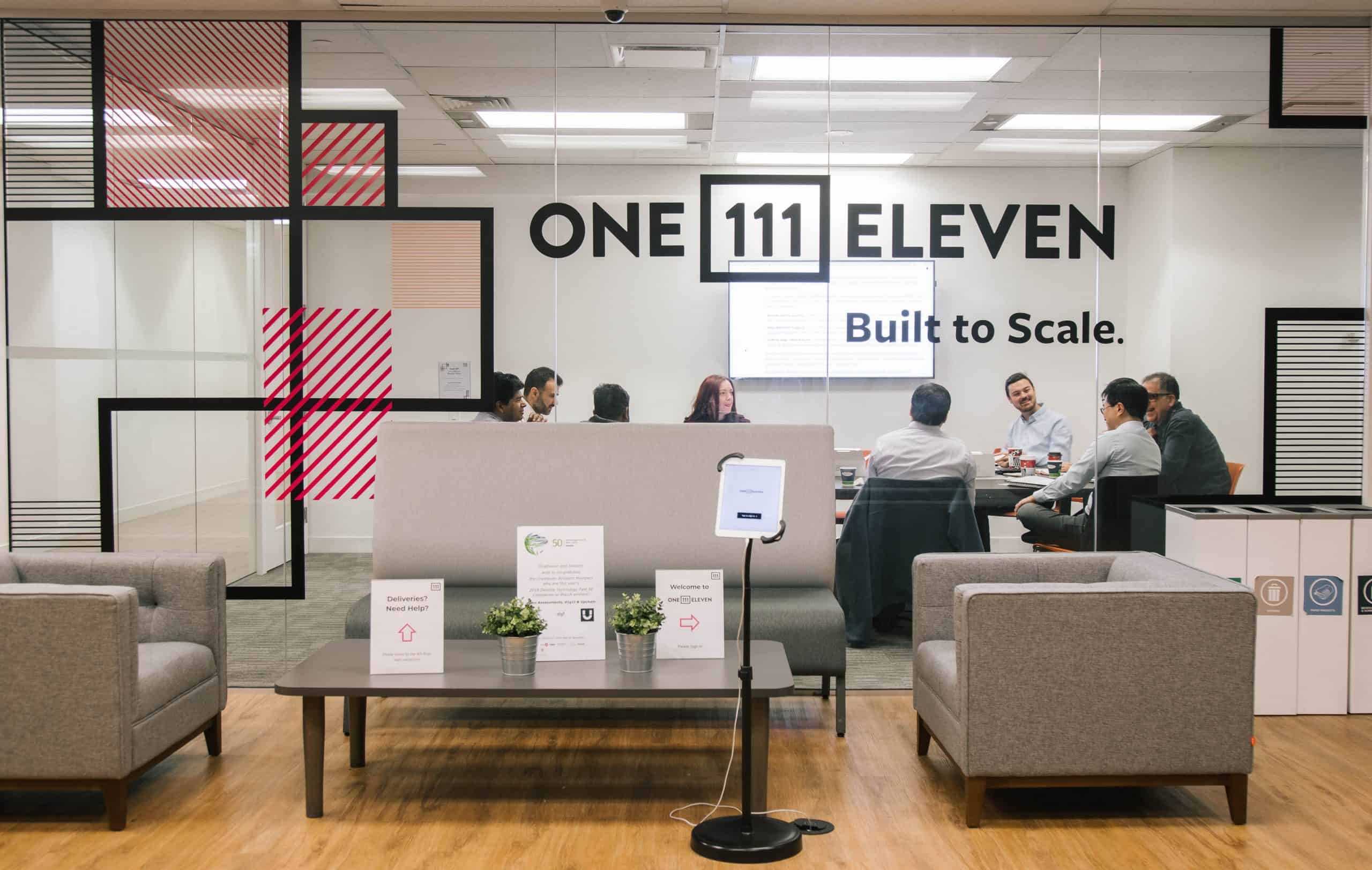 OneEleven is the kind of place where a game-changer moment for a startup happens in the lunchroom.

Case in point: In 2017, co-founders Roxana Zaman and Dr. Brett Beltchetz had just moved into OneEleven with their two-person startup called Maple. Back then, Maple was a direct-to-consumer product: a telemedicine platform that connected patients to Doctors through a mobile app. “We were still trying to grow the team and the company, trying to secure financing for our pre-seed round,” Zaman says.

In his past life, before launching a software startup of his own, Dave had been an executive at Canadian HR and technology giant Morneau Shepell. As they got talking, he suggested Maple partner with the company — planting the seed for Maple’s expansion from direct-consumer to business to business.

“To this day, that’s one of the relationships we’re most proud of,” Zaman says. “And it purely [resulted from] having lunch at OneEleven with like-minded founders and employees.”

If there is anything OneEleven is proud of, it’s the way member entrepreneurs collaborate, share ideas, and help one another. Having more than 50 startups in 125,000 square feet of space means OneEleven hums with activity but is far from crowded. Companies have ample room to grow, private meeting spaces in which to hatch plans, and an impressive setting to host clients. Through mentorship programs, community events, or just that happenstance meeting at the coffee machine, advice is swapped, learnings are shared and crucial connections are made for companies in scaleup mode — and key problems are solved.

In recent interviews with more than a dozen scaling startup founders, one descriptor for OneEleven came up time and again: The place has a buzz.

To Michael Millar, founder and CEO of HealthTech company Verto, the buzz is evident from the way people move through the place.

“I make a joke that you’re effective by [a measure] of how fast people walk around you. If you’re in a really dead-end job, you’ll notice people drag their feet. But people, they walk fast here!”

When Millar moved his then-eight person team into OneEleven from the co-working space they had been working out of, he no longer felt like the lone CEO overseeing every little decision — which, quite frankly, had been a problem until then.

When they arrived at OneEleven, “the lightbulbs went on,” he said. The team instantly felt motivated and empowered (and less packed together like sardines, which was nice, Millar adds).

“As soon as we moved here, it gave us a want to grow, it gave us access to resources … I saw a productivity spike in everyone. It [was like] ‘We’re here, it’s real. It’s progression, it’s hustle.’”

Being around other entrepreneurs has also proved valuable to Verto — and Millar’s been impressed by the generosity so many have shown. That time Nudge CEO Paul Teshima set up a fundraising round and invited a number of OneEleven companies to watch? It was crucial to shaping Millar’s understanding of how to spring into that stage of his company’s growth, he says.

Millar’s made sure to participate in OneEleven’s Hand-up mentorship program. He sees the way it helps his team meet their career development goals. “I always apply as a mentor myself, simply because I know how much my employees benefit.”

Not only does OneEleven support its member companies and their employees, they also use their technology. The Hands-up mentoring program, for example, is currently run through Together Platform, a member company since 2019. This is far from the first successful partnership between OneEleven and a member company. To name a few: OneEleven has been providing an Association Health Plan to its team and members since 2018 through alumni company Humi, member company FormHero has helped OneEleven optimize their application process through their smart form solution, and community member Keyhole provides Hashtag Analytics to support OneEleven’s social media strategy. According to OneEleven’s Executive Director Siri Agrell, “no one in Canada should be saying they support innovation without procuring innovative products from homegrown technology companies. Being a customer of OneEleven’s member companies is mutually beneficial for us and our community’s founders.”

It is this spirit that also helped Blockthrough founder and CEO Martin Kratky-Katz get his company into the space in the summer of 2017. After taking two failed iterations of their product to market, they didn’t quite meet the criteria at the time. But on the good word of Zoom.ai founder Roy Pereira, whom Kratky-Katz knew, and after checking a few other boxes, the company was in. Blockthrough then pursued what would become the third failed version of their product, triggering an identity crisis of sorts for the company. “The fact that most of the companies here are in the scaleup phase, that really motivated me to keep pushing,” Kratky-Katz said. They barely had enough money to make their rent when the “Blockthrough breakthrough” happened: The company pivoted its approach to circumventing adblockers to working with them instead. That’s when they started to gain momentum and grow.

“I do credit OneEleven with psychologically helping with that turnaround,” Kratky-Katz said. Being in a community like OneEleven helped them solve the very problem that Blockthrough had been facing.

From the time his company started in the open concept area on the fourth floor, Kratky-Katz had his eye on the corner office — the first anyone sees when they walk into the building.

“[The space] really does help with talent acquisition. It’s such an energetic environment,” he said. “People come into OneEleven and say ‘this is really cool, this is awesome.’ We’ve had people say that was a factor that led them to work with us.”

The space, and the community, has also meant companies don’t want to leave — even when it really is time.

“We literally tried everything possible to continue to stay at OneEleven,” said Zaman of Maple. “We waited until the last possible moment [to leave].” Around the time of their departure, the company had grown to 40 people and was spilling out of the largest glassed-in office on offer.

Now that they’re in their own space up the street and around the corner, they’re happy to all be working together in the same area, though they’re wistful of not having to worry about security, which maintenance company to hire, or how to organize key fobs for their employees. Those didn’t become problems or anything to worry about until they set out on their own. But what they miss the most, Zaman said, is the community. Luckily, OneEleven has made itself a community hub for all tech startups in Toronto — and companies like Maple know they’re always welcome home.